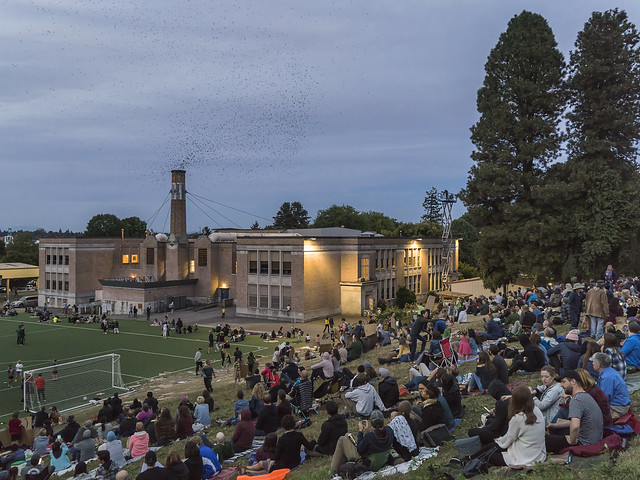 School starts, vacation’s over, we’re heading into a more serious season. (At least until Halloween). In France, it’s called la rentrée, or the return. In a country where 30 days of paid vacations are the norm, where even businesses and shops shut down during the month of August,  la rentrée  is both a return to normalcy and also a kind of happy encounter. How was your vacation? I’ve haven’t seen you in ages! You look great!  (Okay, that last was a serious exaggeration but you get my point.)

At the Chapman School in northwest Portland, Oregon, September signals the gathering of the Vaux swifts. At sunset, thousands of these birds swirl and dive and finally roost in a tall old chimney on the school grounds. It is such an extraordinary sight that flocks of people show up night after night perched on the hill, watching the amazing acrobatics of these birds. And eat and drink and play.

This year, due to covid, the spectacle is still on but there will not be an audience.

So, we’ll wait for next year.

And yet. We’re not quite done with summer… so let’s go outside! And have a picnic!

I am solidly with M.F.K. Fisher who in her 1957 Harpers’ article The Pleasures of Picnics, states that she prefers prepared food because she does not “like to cope with open-air hearths and spitting casseroles and frying pans on a picnic.” Nevertheless, if you are invited to a grill-happy picnic, do not say no. It’s a gift.

M.F.K. also feels that a picnic must not be on your terrace or in your yard, but somewhere away from home. It’s more adventure and less ‘carry your plate outside and shut the screen door.’

In my youth, the picnic site was often chosen in a woodsy place with some water source. And they often involved a project while the food was being organized. “Let’s build a dam”, my father would cry, marching over to any little creek nearby. He and my brother (and sometimes myself) would pile up rocks and sticks so as to divert themselves and the creek. This took a little while until finally, my grandmother and mother would call us. And wash your hands, please.

Looking back, we can all think of picnics: large, small, couples, babies, dogs, ants, chilly, hot, side of the road, back of a car, edge of a cliff, side of a sand dune… and all of it worth it.

The Vaux Swift performance at the Chapman School isn’t over and we’ll just be patient until next year. In the meantime, let’s go outside! And find a good spot to spread out our picnics. For the time being, we’ll just be a little less bunched up…

Here’s a menu I have enjoyed since childhood and now repeat:

I’ll start with the least complicated:

Butter your bread lavishly.  Make sandwiches. Cut off the crusts (optional – but if you do, save the crusts. Sometime later, make croutons for salads). Wrap in wax paper.

Beat the cream until stiff. Put a heaping tablespoon of cream on a wafer. Top with a second wafer and press gently. Repeat until all the wafers and cream are used. Stack up about 5 of the sandwiches and wrap in wax paper. Seal with scotch tape. Continue with the rest of the ‘sandwiches’. Put in your freezer or cooler until dessert time.

Hard boil 6 eggs. Cool, cut lengthwise, and put the yolks in a small bowl. Mash the yolks with a fork. Add about 2 tablespoons of mayonnaise and 1 tablespoon softened butter and combine. Then add a teaspoon each of vinegar and Dijon mustard.  Your mixture should not be runny but you may need to add a bit more mayonnaise/butter. Season with salt, pepper and paprika. A little hot pepper if you insist.

And by the way, the butter is crucial: when you refrigerate the eggs, the butter keeps the filling firm (and delicious). Don’t forget it!

Fill the egg white with the yolk mixture, mounding it up. Decorate it as you wish: paprika, chives, parsley, capers, etc.

2 comments on “Let’s Go Outside”